Its Summer at Newcastle Golf Centre

FootDarts has arrived at Newcastle Golf Centre Dublin, combining football and darts in a fun and easy! activity for all no matter what your skill or fitness level. Test your accuracy with FootDarts in Dublin.

Score points by kicking the football at a giant inflatable dartboard. Or take aim at the bullseye to prove who has the best shot.

In FootDarts players divide into teams and take turns to try to accurately land the ball on the board. You can play by the rules of darts and starting at 501 aim to score points with the first team to reach 0 declared the winner. Will you hit the bullseye!

Have you ever imagined kicking a rugby ball on a golf course?

Played with the same rules as FootGolf the only difference is the shape of the ball. And herein lies the challenge! With FootGolf the ball generally rolls in one direction. In rugby FootGolf, once kicked, the destination of the ball is not so certain!

With the season coming to an end for many football clubs and sports clubs we have the perfect venue for an end of season outing to mark the occasion.

At Ballybane FootGolf we have catered for football teams, GAA teams, tennis clubs, rugby clubs and more. FootGolf at Ballybane offers a fun activity that also acts as a great team bonding finale to a busy season. 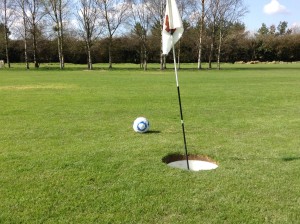 We dont just offer FootGolf either. At Ballybane FootGolf you can also play Par 3 Golf, Laser Clay Shooting and, the newest addition to our facility, FootBowl. This means that you can take part in one or a number of activities.

Discounts are available, depending on the number of players. If you require food, we can arrange delivery from our local takeaway (must be paid on the day of event prior to order). 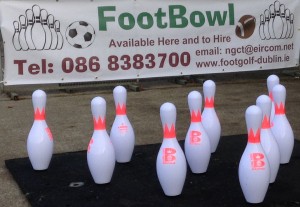 Where one season ends another begins and with lots of sport to look forward to over the Summer, Ireland at Euro 2016, the Olympics in Rio, the GAA All Ireland  Championship and more now is a great time to book your end of season outing.

Up to five players can shoot at the same time. A clay is released by the operator. When a shooter scores a hit, the beam is reflected back to the gun and registers a “HIT” on the scoreboard. Hit the clay, get the points! Authentic sound effects enhance the experience.

The computerised scoreboard tallies up hits and allows several different forms of competition to take place, catering for all levels of expertise. 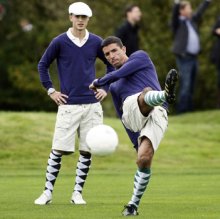 Dont worry there is no dress code at Ballybane FootGolf . The only request we have is that you wear clothes of some kind!

If you do want to wear the official FootGolf outfit, here is a guide to help you.

There are no football boots with studs or cleats, only flat shoes or runners can be worn. This is the only restriction we have in terms of a dress code so if you want to dress as a smurf or Homer Simpson that is no problem! Take a picture and we’ll put it on our Facebook page for the world to see! Enjoy your game at Ballybane FootGolf. 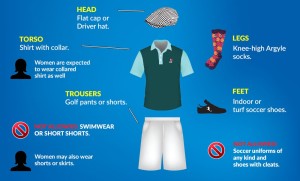 Did you know Ballybane FootGolf was featured on RTE programme Don’t Tell the Bride!

The show’s format consists of a couple who are given 10,000 Euro to spend on their wedding but they must spend three weeks apart without contact and the bridegroom must organise every aspect of the event and attire including the wedding dress, as well as the hen and stag parties, surprising the bride.

Ballybane FootGolf is an ideal location for your Stag or Hen party. In fact for any outing, corporate day, school tour, team building Ballybane FootGolf provides a great day of entertainment for all ages. We can even arrange for pizzas and chips to be delivered after your game to get your energy levels back up!

The Rugby World Cup is almost here, why not bring along a rugby ball and play Rugby FootGolf!

The only game of its kind in Europe, FootBowl combines elements of football, bowling and more in a new fun activity. The game is played by two or more people and is great for families, groups stags, hens and team building.

Inspired by tailgate party games that are played before American Football games, FootBowl is great entertainment that will have you hooked from  start to finish.