FootGolf in Dublin – FootGolf at Ballybane

FootGolf is the latest craze sweeping the world and it is quickly becoming incredibly popular in Ireland. Known also as SoccerGolf and FootballGolf , FootGolf is a combination of two of the worlds most popular sports – soccer and golf! 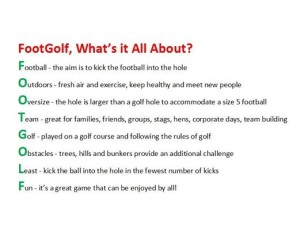 The rules of footgolf are similar to the rules of golf. The game is played on a golf course, with sand bunkers and various hazards. The first shot has to be played from the tee, and to reach the hole, bunkers, trees and hills have to be crossed or avoided. The player who completes the 18 holes with the fewest shots wins.

It can be played by all fitness levels, all skill levels and takes less than 90 minutes for a group of 4 people. It is a game of accuracy and doesn’t require running.