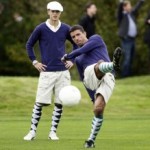 Argyle socks and knee-length shorts, those are apparently part of the dress code for footgolf, but what are the rules?

The game is ideally played by 2 to 4 players at a time and a game can take 1 to 2 hours depending on the individual play.

Playing is really easy, you just kick a football instead of hitting a golf ball with a club. The purpose of the game is to kick the ball from tee area and get it into the hole in as few kick as possible.  The ball is regarded to be in the “hole”, when it is in a rest in the circumference of the hole, and it is lying with its full scope under the level of the hole’s edge. After 18 holes the lowest score is the winner. It is a great social game and can also be played in a competitive format if desired.

There is no golf shoes or football boots permitted to be worn in the game, runners or soft type footwear is recommended. NO SPIKES OR STUDS.

FootGolf rules are based on the rules of golf with local rules applying to each course.

The Rules of FootGolf

The game is played with a Size 5 Soccer Ball,  1 ball per player. There are max 4 players per group. Only runners or soft shoes may be worn while playing Footgolf. No Football Boots, Studs, Spikes or Golf Shoes permitted. The ball is kicked from the teeing area(Yellow Markers) to the green(Indicated with White Flags, 1 – 18).

The player getting the ball into the hole in the fewest number of kicks is deemed to have won the hole. The player with the lowest score or who has won the most holes is deemed to be the winner. The starting kick can be made only from the ground, and the player may make a kick-off with both his left or right foot.

Kicks can only be made with these parts of the leg:

Every contact with the ball counts as one kick.  Ball Unplayable Under Tree or in Ditch – Drop Ball, not nearer the hole (1 Penalty Kick).

Note: No Running on the Course, No Shouting or Unruly Behaviour Permitted Any Person causing damage to the Course will be Asked to Leave Immediately Without Refund. Please Let Faster Players Through, Rake Bunkers, Be Courteous to Other Players

2. Forms of the Game

Note: If there is a dead heat, the Organizing Committee may increase the prescribed round with such a number of sections which is necessary for winning the game. If a player does not complete a section, namely does not kick the ball into the hole then they shall be excluded from the competition.

2.2. Match play
Match play gameplay means that only the number of the won rounds matter, not the aggregated number of kicks. The biggest advantage of this gameplay is that the messed up section means only one hole loss. The player who won the highest number of holes will be the winner of the Match play competition.
Note: If there is a dead heat, the Organizing Committee may increase the prescribed round with such a number of sections which is necessary for winning the game.

The “course” means the whole area within any borders determined by the Committee.
The Committee has to determine exactly the following:

The Organizing Committee only has an opportunity to designate new holes if the installation of the new holes finishes before the competition’s day so they can guarantee the equal conditions for all of the players.

The “teeing ground” is the starting place of the section to be played. It is a rectangular area, the depth of which is two steps long and both its sides are marked by the outer edges of the two tee-markers. The ball has to be placed within this area; however, the player may stay out of this area.
Tee-markers count as immovable artificial objects and it is prohibited to move them. PENALTY FOR MOVING THE TEE-MARKERS: 2 penalty kicks.

Fairway
The best path leading from the teeing ground to the green and the hole.

Rough
The less well-maintained parts of the sections which make the game more complicated, and functions as an obstacle.

The green
The green is the part of the section which is covered by carpet-like grass and where the ball is only allowed to be rolled, this is called putt.

The hole
The diameter of the hole has to be exactly 53 cm and 40 cm deep.

Meaning of poles or painted lines:

General description
The ball used by the player has to be a size 5 football with a circumference of 68-70 cm, and weight of 410-450 g. It is the responsibility of the player to play with the appropriate ball.
Every player shall put an ID sign onto its ball to help the identification.
The basic principle is to get that ball into the hole, which we brought into the game at the teeing ground; otherwise the player can be disqualified. A ball can be exchanged only between two rounds, except for the cases when a ball got lost or is no longer appropriate for the game.

Ball inappropriate for the game

Note: If the other players would like to discuss the state of the ball, they have to do it before the player plays another ball.

A ball shall be regarded as “lost” if:

If the ball is regarded to be lost the player can decide to play with a replacement ball. It only can happen if the other players and the Marshall agreed with it and the replacement ball is appropriate for the game.

A “wrong ball” is any ball not belonging to the player, such as:

PENALTY FOR PLAYING WITH A WRONG BALL: 2 penalty kicks.

If the ball hits any objects which are not a part of the court such as an animal, another ball or tree the player will not receive any penalty, but has to kick the ball from where it fell. However, if the ball hits the player or their equipment the player receives one penalty kick and has to play the ball at it is lying.

Balls disturbing each other

In case two balls are so close to each other that they are disturbing each other, one of them can be marked and raised, and after the kick of the other one, it can be placed back. The original position of the ball has to be recreated to the biggest possible extent.

When playing with a wrong ball although the kick will not count, the player is going to receive two penalty kicks. The original situation of the balls has to be recreated.

Ball kicked out of bounds

The balls which got kicked out of bounds have to be taken back to their original places while the player receives one penalty kick. A ball is out of bounds if it is lying entirely out of the area fenced by the white poles. However, the players can stay out of the borders in order to kick a ball within the course.

At the first teeing place the order of the game is decided by a starting list. At the further teeing places the player is going to have the right to start who managed to reach the lowest number of kicks in the previous section. If two or more of the players reached the same number of kicks then the player whose ball was in the hole first gets to kick first.

In case of every delay caused by any of the players they can be excluded from the competition by the decision of the Head of the Marshalls.

The starting kick can be made only from the ground, and the concerned player may make a kick-off with both his left or right foot. Kicks can only be made with these parts of the leg:

Note: Every contact with the ball counts as one kick.

After each kick the Marshall draws a stick onto the score card, and after finishing the section aggregates the results. After the players finish every section on the course the Marshall has to aggregate all of the results of each player, authenticate it with their signature and give the score card to the Organizing Committee. Naturally the players have the opportunity to see their score.

In case of cheating the player can be excluded by the Organizing Committee.

In case the ball is in an especially bad situation, it is better to declare it as unplayable. The player may freely decide about this, however, they will receive penalty for moving the ball.

There are 3 possibilities to do with the ball:

The player is allowed to move every loose obstacles or movable barricades as long as their ball stays on its place.

PENALTY FOR MOVING THE BALL (in this case):

Agreement on an invalid game

The players cannot agree on excluding the validity of any rule, or not taking into consideration any of the issued penalties.

The players cannot practice on the competition course just before a round or a playoff on any day neither can they try out the green in case of causing harm to the surface.

PENALTY FOR TRAINING DURING THE COMPETITION: disqualification.